“It’s impossible not to brim with pride at the quality of work emerging from the artistic integrity and confidence RADE instills in people hacked at by the grey of life.”
Michael McDermott, Le Cool Magazine

Our latest film, a HUGE success! 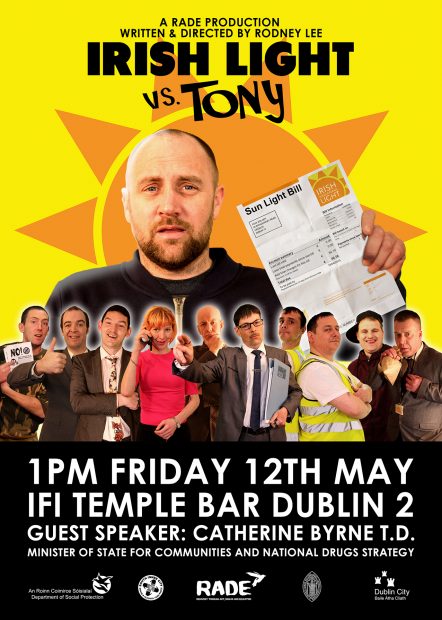 Thank you all for coming today and joining us for the launch of our film.  We are especially pleased to welcome the Minister Catherine Byrne here today.   We are bursting with pride about our latest production. I also want to welcome Cllr. Dermot Lacey.
RADE owes such an enormous debt of gratitude to the many artists that have provided such good will towards our project over the years.  Many of whom are here today and we also wish you a warm welcome.  ‘Irish Light Vs. Tony’ is about one man’s struggle and any resemblance to actual semi-state bodies such as, ‘Irish Water’ is absolutely 100% purely coincidental!

Regardless of what anyone’s feelings are about water charges, I think the most powerful message that comes with this film is that it now exists.  It has given a voiceless people a platform and an opportunity to contribute to the social community.

The first time I worked with drug users was almost 30 years ago, in the early 1990s, making theater with the clients of MQI. It was an amazing awakening: Engaging people with drama and performance worked as a temporary distraction and an attractive focus for people whose lives were compromised with issues of addiction.
RADE has developed out of that time. We do theater plays, but we also do art exhibitions, publish books, Comics, Music CD’s, Films, Dance, Radio, Opera, musicals, and it still works:   The project provides a window of opportunity to escape the snares and traps of every day drug using.   The proof is in the pudding.   And we are going to taste some of the pudding today.    The period in the 90’s that we grew out of was a different time. FAS was the boss. And we were a CE scheme, I think we were the very first of, what was called ‘Special CE Schemes”. Later the first drugs Minister, Eoin Ryan, who is also here today, Eoin ring fenced 1000 places for drug recovery projects. In those days there was scope and room for invention. Times change and they say you have to move with the changes. Well we try. We’re with a new department now, the Department of Social Protection. And I think we’re like round plugs in square holes. We’re water and oil. We don’t fit. The original idea had been to get CE to adapt and fit the needs of recovery services. Now the emphasis is all about how to get drug services to meet the needs of CE and fit into a mainstream framework of ‘work activation programmes’.
We are particularly grateful to our DSP Officers, Adedolapo Odukoya, Tony Hayden and Monica Alonso, helping us through our recent difficulties and our huge loss, due to the untimely death of our friend and colleague Eoghan O’Neill. I want to publicly thank them for their invaluable goodwill. However I understand that their hands are tied and that they are confined to working within the policies and structure of their department. It’s not their responsibility that drug services don’t fit the boxes.
This current scenario is causing a crushing and unnecessary strain and difficulty for everyone. And if there is one ask we have Minister, it is to ask you to use whatever influence you can at the cabinet table, to affect some change in this regard that is impacting on all of the frontline services.
Now, back to the film and what today is really about: The first time I heard the RADE group reading the screenplay for this film, the script crackled to life immediately and the participants made it their own. And as usual everything went wrong that could go wrong: seriously wrong, our strongest actor, Andrew Talbot died tragically a week before we were about to shoot. Two other of our participants, had learnt their lines, but they got seriously ill and were also out of the picture. But we kept going forward and with the cool heads of our writer/ director, crew and participants, we made it. The composer and member of Aosdana, Trever Knight came on board and put a classy music score together for us. Rodney Lee, our writer/director, practiced pure magic in the editing room and Sine Lynch attended to all the production detail. Sine gets my Oscar, for keeping the head and delivering this film, with all of the extra work that smothered our project, when we had so sadly and suddenly lost our key colleague Eoghan O’Neill. And Sine, eight months pregnant too.
I want to pay tribute to all of the RADE staff: To our Rehab coordinator Averyl Swords, and the keyworkers working with Averyl: Lucy Cullen and Monica Rampal. Also thanks to our visiting Councillors, Tom O’Connor, Hannah Kelleher and Pat Kennedy. The work of our rehab team is at the core of what RADE is about: to help people who are struggling to make progress in their lives.
We are very grateful to our voluntary Board of Directors, who have been so generous and giving of their time, care and attention to the project. I want to also single out Teresa Weafer for coming to our assistance and finding a pathway through our recent difficulties recruiting a replacement Supervisor.
We owe a considerable debt of gratitude to the City Council, our landlords in the OLV building, and we particularly recognise and thank Brendan Kenny, Assistant Chief Executive, for his support.
I want to welcome Chantelle Maritz, who is taking over for Sine, on maternity leave and our new support worker, John Gavin who joined us last week. Also I want to welcome our new programme Participants and let them know that next year we’re going to be doing it all again.
Finally I want to mention again the 2 people that passed away in the last two months. We are still reeling from the shock and loss. RADE participant Andrew Talbot, who had so much talent and promise and Eoghan O’Neill who designed the film set and guided Ray Doyle and Steven Cumerford through the building of the set. Eoghan had given so much over his 12 years with us to make RADE the colourful and exciting project that we are so proud of today.