“RADE has been proactive in the area in reaching into the world of the Arts to bring about recovery and rehabilitation.”
Dr Margaret Bourke

Spare change is another satirical take by RADE, this time on the housing crises in Dublin and it packs as strong a punch as ever!
Once again the cast is made up of the current RADE participants who deliver sterling performances all around.

Please join us for the Second Cinema screening of the Film.

Book your seat as soon as possible! 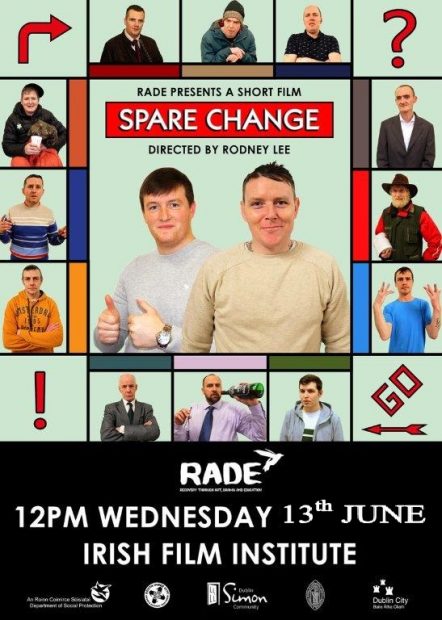 Comments from the Director Rodney Lee

‘Spare Change’ was developed from the true-life tales of the RADE participants and their first-hand accounts of the current housing crisis. The goal was to capture their experiences and shape them into an engaging narrative. Working on this film with the truly committed RADE staff and talented participants has been an exciting journey – not without its challenges – but ultimately hugely rewarding. Working with the participants to bring out their experiences and focus on the issues that really affected them, then developing a script which would encompass these issues was an inspiring and humbling experience. Improvised workshops based on the script brought humor and jokes funnier than anything I could ever write. And finally shooting the film and seeing the dedication and passion of everyone involved, many of them stepping well outside their comfort zone, proved to be one of the most creatively satisfying experiences I’ve ever been involved with. Rodney Lee, Director.

‘Spare Change’ is a comedy about people faced with the most impossible, desperate struggle known to modern man; navigating the rental market in Ireland today… Ed gets a shock when his landlord raises his rent without warning. Already stretched to the limit and only just making ends meet, things look grim until Ed decides to sublet his flat to the multitude of homeless people looking for somewhere to stay. As long as the landlord doesn’t find out, everything will be fine… but Ed doesn’t count on the crazy tenant who claims to have stolen the housing list, suspicious neighbours and an unexpected visit from the Minister for Housing… This short film is an absurd comedy about the desperate state of Ireland’s housing crisis. From unscrupulous landlords to the ‘invisible homeless’ and politicians reverting to Victorian attitudes, there’s never been a worse time to be without a roof over your head. What can be done?